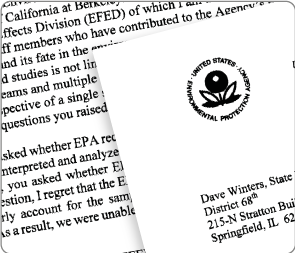 Dr. Tyrone Hayes is a University of California, Berkeley, researcher who contends that atrazine causes sexual abnormalities in frog populations and may cause problems in humans.

However, Dr. Hayes has a long history of unreliable claims.

Further, Dr. Hayes consistently claims he has shared the data from his frog studies, but EPA has twice gone to the trouble to refute his claims in official and highly public pronouncements.

In 2005, Anne E. Lindsay, then deputy director of EPA's Office of Pesticide Programs, testified before the Minnesota House of Representatives:

“Dr. Hayes claims not only that his laboratory has repeated the findings many times in experiments with thousands of frogs, but that other scientists have also replicated his results. EPA, however, has never seen either the results from any independent investigator published in peer-reviewed scientific journals or the raw data from Dr. Hayes' additional experiments …”

In 2010, Donald Brady, director of the Environmental Fate and Effects Division, again stated in a letter to an Illinois legislator that EPA “could not properly account for the sample sizes and study design reportedly used by the Berkeley researchers.”

Of course, this matter could be put to rest once and for all if Dr. Hayes would post his complete data on his website. So the question remains: Why won't Dr. Hayes make his data public?

In addition to questions about Dr. Hayes' methodology and findings, his professional behavior also has been called into question.