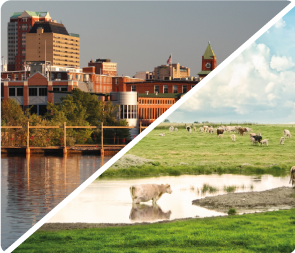 Where did he find significantly higher rates of frog deformities?

Where did he find them thriving?

In rural ponds near agricultural areas.

“What we found in most of the agricultural ponds we sampled was no evidence of reproductive deformity,” Dr. Skelly told The New York Times.

Other surveys show that the native northern leopard frog continues to thrive in areas where atrazine is heavily used, including in irrigation ditches next to cornfields in the U.S. Midwest.

So what's causing the abnormalities in cities and suburbs?

Skelly's work suggests that a combination of household chemicals, including pharmaceuticals and plastics that mimic hormones, could be a driver of the interest abnormalities in frogs.

Globalization also seems to be driving the spread of new infectious diseases, including chytridiomycosis, an aquatic fungus of unknown origin implicated in wiping out more than 200 species.

Whatever is harming the world's frogs, it isn't atrazine.